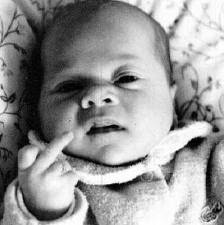 Dean Cochrun, a 28 year old inmate in a South Dakota prison, wants his foreskin back after Sanford Hospital performed a circumcision, 28 years ago.


The lawsuit states, in part:


"I was recently made aware of the fact that I had been (circumcised) and that… I was robbed of sensitivity during sexual intercourse as well as the sense of security and well-being I am entitled to in my person,” ﻿

WTF? He just discovered he was circumcised ??﻿ The winters in South Dakota must be long and very cold.

Mr. Cochrun's foreskin did not return our phone calls for comment.