CAMBRIDGE, Mass. — A historian of early Christianity at Harvard Divinity School has identified a scrap of papyrus that she says was written in Coptic in the fourth century and contains a phrase never seen in any Scripture: "Jesus said to them, 'My wife … .she will be able to be my disciple."

The finding is being made public in Rome on Tuesday at an international meeting of Coptic scholars by the historian Karen L. King, who has published several books about new Gospel discoveries and is the first woman to hold the nation's oldest endowed chair, the Hollis professor of divinity.

"This is a Muslim conspiracy and I'll kick her ass"
Sister Mary Brutus, HTC﻿

The Call to Action has been heeded by the order of sisters known as The Holy Thugs for Christ. Roving bands of armed nuns have rioted, shot at Mosques and search for Muslim Ambassadors. 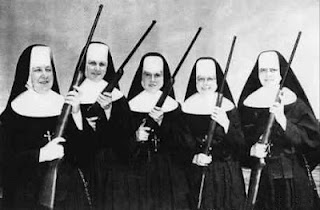 ﻿Nuns say, "Lock and load for Jesus" and "Tango Down for Peace."

We contacted the White House and received this response: "The Catholic Church must provide free birth control supplies to all Nun Warriors."

At the foundation of Christianity is the belief that Jesus was incarnated in the human form to live as a suffering man in atonement for our sins. Therefore, it is our considered opinion that in order to properly suffer Jesus must have a wife.