Women don't say what they mean 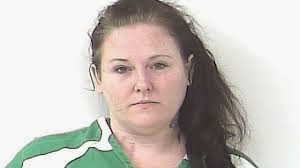 Melissa Bopp
FORT BIERCE, FLORI-DUH
Local police say a Florida woman stabbed her soon-to-be husband in front of her child because he wouldn’t take her to a liquor store.

Melissa Bopp was charged with aggravated battery after she attacked Cedric Henry with a “large knife.”

Immediately prior to the stabbing, Bopp had asked Henry to take her to the store to buy liquor, according to a Fort Bierce Police report. Henry refused, saying he didn’t want to drive intoxicated.

After the stabbing, Henry was taken to a hospital in an unknown condition. His grandmother says the couple was supposed to be married next week.

Our Refried Confusion reporter caught up with Melissa at the jail. When asked for a comment, Ms. Bopp replied " I have learned that me and Cedric should have had serious discussions while planning to get married. My fiancé needs to understand that what I was really asking is 'Do you want to go to the liquor store or do you want me to stab you?'

I love a woman with spirit.